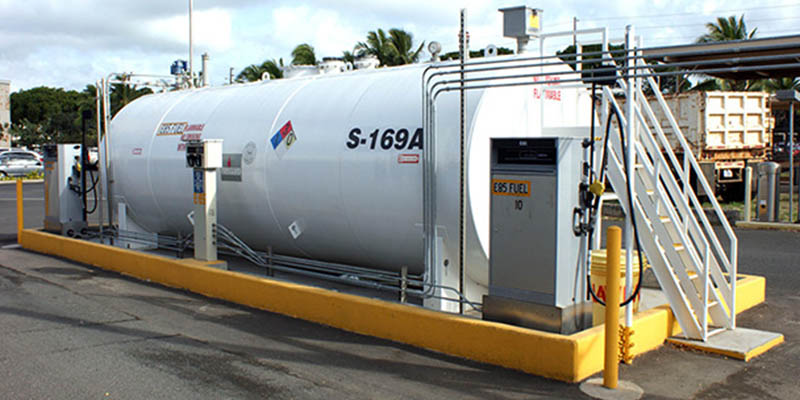 It understandable with the number of above ground storage tanks (ASTs) in service growing every year, combined with the average tank life approaching 40 years, that a risk-based methodology for evaluating and maintaining shop fabricated carbon or stainless steel fabricated ASTs was developed.  The Steel Tank Institute (STI) has developed standardized methods and practices for the inspection of shop and field erected steel tanks designed to minimize the likelihood of a release of a hazardous substance from a ruptured AST or an explosion due to a malfunctioning AST vent system. After all, it is required under EPA 40 CFR, Part 112 that ASTs are inspected as part of an SPCC plan, and tanks can significantly deteriorate with time, particularly if coatings are not maintained and corrosion factors come into play originating from both inside and/or outside the tank.

Inspection time periods can range from 2 years to 20 years depending on the category of the tank and the scope of the inspection.

As a remedy to these factors, STI has issued the Standard For the Inspection of Above Ground Storage Tanks, SP001, issued September 2011, 5th Edition to provide guidance on the inspection of shop fabricated or field erected ASTs by STI/SPFA certified inspectors. STI-SP001 also references other technical publications such as the Underwriters Laboratories UL-142 Standard for Steel Aboveground Tanks for Flammable and Combustible Liquids, which provides standardized tank steel thickness in the shell (roof, bottom, head or wall) of UL-142 designed tanks to gauge corrosion factors when examining an AST to determine suitability for continued service. However, the STI-SP001 standard is risk-based at its core due to the method in which tanks are ranked for inspection schedules based on the presence or absence of various leak detection and spill control features, capacity, as either Category 1, 2, or 3 Tanks.

A tank ranked as a Category 1 AST must have at minimum spill control and a continuous release detection method (CRDM). A CRDM is defined by STI as “a means of detecting a release of liquid through inherit design.” CRDM is passive because it does not require a sensors or power to operate. Liquid releases are visually detected by operators. A CRDM can include the use of a release prevention barrier to divert leaks toward the perimeter of the AST and can be constructed of concrete, elastomeric liners or other suitable materials. A Category 2 tank has spill control, but is without a CRDM. Category 3 ASTs have neither spill control nor a CRDM and are in direct contact with the ground surface. Category 3 tanks pose the highest risk and must be inspected more frequently than Category 1 or 2 tanks.

Inspection time periods can range from 2 years to 20 years depending on the category of the tank and the scope of the inspection. For example, if a formal internal inspection was conducted as well as a formal external inspection of the tank (longest time period between inspections), or if just an formal external exam was completed (shortest time period). However, if a tank is damaged by other equipment/vehicles, over pressurization, severe weather, etc. it must be inspected as soon as possible by an STI-SP001 inspector to determine if it may be left in service.

A knowledgeable STI certified inspector performing a STI-SP001 inspection in conjunction with a certified Ultrasonic Thickness Testing (UTT) inspector can determine numerous risk factors to the life of the tank.

The current STI-SP001 standard covers numerous aspects of the tank inspection process from inspection schedules, to inspector qualifications, safety considerations, formal internal and external inspection guidelines, leak detection methods, recordkeeping, tank venting requirements, and states what is needed to achieve an inspection designation as “Suitable for Continued Service.” This designation, if awarded by the STI certified tank inspector, allows for the AST to remain in this category for a period of up to 20 years without requiring another STI-SP001 certified inspection, provided the tank is not damaged and meets other engineering standards as set forth in the standard, such as the completion of periodic in-house inspections usually noted by a checklist.

A knowledgeable STI certified inspector performing a STI-SP001 inspection in conjunction with a certified Ultrasonic Thickness Testing (UTT) inspector can determine numerous risk factors to the life of the tank. Specifically, the STI inspector will first review prior tank inspection reports from the tank owner or tank specifications provided by the owner or manufacturer of the tank. The STI inspector will try to determine if the tank was constructed to standardized UL 142 specifications. This data will provide a “bench mark” steel thickness for the tank’s roof, shell and tank head. The UTT inspector will take numerous UT readings on the shell of the AST to be compared against the tank specification data related to original steel thickness as set forth by UL 142 or the tank manufacturing company. Through the collection of this data and a comparison to previous inspection or tank specification data on steel thickness, a rate of corrosion can be calculated and will be used to determine if the thickness of the steel is suitable for the tank to remain in service.

A STI-SP001 inspection can identify tank system problems early before they become too large and potentially cause harm to health and the environment.

The integrity or thickness of the steel shell are sometimes influenced by microbial-influenced/induced corrosion (MIC). MIC is corrosion from within the tank caused by certain microbes that through sulfuric acid excretions can greatly increase the rate of steel corrosion. A skilled inspector will look for evidence of MIC through evidence of a ring pattern on the tank or cone or crater shaped penetrations on the steel.

It is often stated that the best place for a STI-SP001 inspector to begin an inspection is from a 100 feet or more distance from the tank and then moving in closer with each stage of the inspection so that the entire tank system is fully evaluated. Problems with secondary containments, venting systems and shell buckling are found this way. However, a skilled STI-SP001 inspector adjusts from large to small scale issues to find evidence of MIC, stuck emergency vents, malfunctioning valves, weeping pipe systems and improper tank supports, to name just a few items that pose major risks to a safe and long lasting tank system. A STI-SP001 inspection can identify tank system problems early before they become too large and potentially cause harm to health and the environment. EI has experienced engineers and STI-SP001 Inspectors on staff to assist in conducting all facets of STI-SP001 compliant AST inspections.