Under Pressure: OSHA’s Stance on Compressed Air for Cleaning Purposes 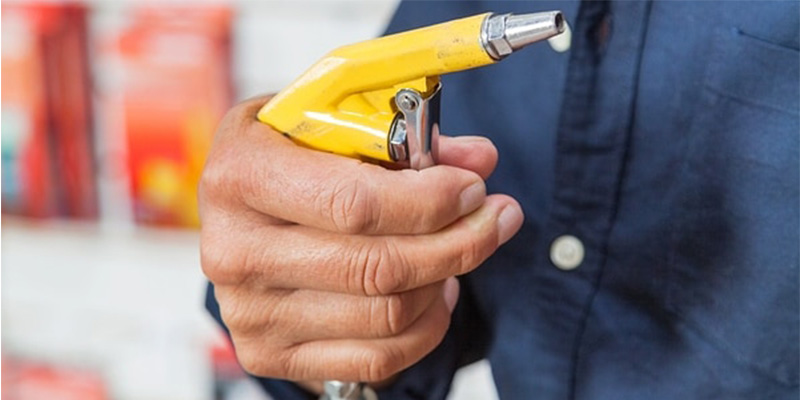 While it is one of the shortest of the OSHA general industry standards, it is also one of the most misconstrued.

To the logical reader, the standard appears to mandate the air used for blowing off equipment, sweeping the floor, or other cleaning tasks must be regulated to no more than 30 psi. Well, that isn’t exactly what the standard is saying. When stating the air must be reduced to less than 30 psi, OSHA is referring to the static pressure when the air nozzle is dead-ended against an object such as the human body. The dynamic pressure – that’s the velocity downstream as the air travels from the nozzle, may be as high as needed as long as the static pressure, when dead-ended, does not exceed 30 psi. That is the reason employers must train workers about the hazards of compressed air and to understand the importance of not altering air nozzles.

I have seen workers replace the safety tips (Figure A) with tubing, pipe or nipples (Figure B). It isn’t uncommon to see duct tape wrapped around nozzle tips to cover the relief holes, or even braze or solder openings shut. Such actions prevent the air flow from being safely directed through the side openings if the nozzle is dead-ended. Thus, the line (dynamic) pressure is not reduced and workers are at risk of compressed air injection and a deadly embolism.

For more information, see the directive STD 1-13.1 or a letter of interpretation regarding the reduction of air pressure below 30 psi for cleaning purposes.

Learn more about this and other mysteries at EI’s Advanced OSHA course at EI’s corporate offices in Morrisville, North Carolina on August 20-21, 2019.